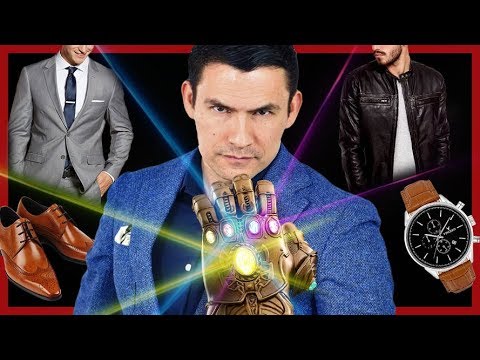 6 Infinite Style Tips Antonio Wields Fashion Infinity Gauntlet [0:00:00] With a snap of my fingers, half the world’s population aka every single man understands these six key concepts when it comes to men’s style What are they? Guys, that’s what we’re getting into in today’s video

[Music] First up, we’ve got the purple gem, the power stone The power stone controls all the power in the known universe How does this apply to men’s style? Because if you want to project strength, power, masculinity, pay attention to what you wear, pay attention to your hairstyle, pay attention to the way that you stand Yes, the way that you stand sends a quick signal to the world of who you are and where you’re at in terms of status and power Now, when it comes to clothing, the leather jacket, this right here studies have shown when women see a piece of leather, they’ve looked at leather fabrics they feel this the most masculine of all of the different fabrics out there

It’s something that sends a signal of strength Now, when it comes to hairstyles So, if you are losing your hair you’re thinning up up here, that is one of the weakest signals of strength and you don’t want that Instead, maybe shave it off, all of sudden you’re going to come off as stronger more dominant more aggressive Interesting stuff here, interesting bits of info that you can use to your advantage

Next up, we’ve got the blue gem, the space stone The space stone enables you to travel anywhere you want in the universe You can be wherever you want to be How does this apply to men’s style? Because any place you go, gentlemen, there is a dress code Now, understand if you have an interview and they say, hey, dress however you want, that’s not exactly true

If you show up naked to that interview, unless it’s for a nudist colony, you’re probably not going to get the job Dress accordingly depending on– if you’re going to work in a warehouse, you do not wear a suit to an interview That’s simply just doesn’t make sense and it shows that you actually don’t pay attention to the situation Remember, gentlemen, there is always a dress code Next up, we’ve got the red gem, the reality stone

You may have so much great things to offer the world, but understand the audience those bankers who you want to get that loan for a couple of million dollars, they’re wondering who is this guy and what would I ever loan him the money? So, understand, yes, you’re going to probably have to practice wearing something you don’t normally wear, but you’re going to be able to get in there speak their language and be able to give that presentation so you can get that loan That’s what I want to see Understand your reality and then use that to actually get what you want when you walk in there Next up, we’ve got the orange gem, the soul stone How does this apply to men’s style? Because you are unique, there is nothing out there like you

Think about this You are a combination of a genetic material that has never been seen before and you’re here for a purpose, you’re watching this video because you’ve got a big mission something to accomplish in this world And I want you to use clothing to help send the message, so when you walk into the room people can tell, wow, this guy has something to offer So, you need to find your trademark look It may be a jacket, it may be a hat, maybe glasses, you may go with like yellow

The key point here is that you are unique, you are meant for something special Use style to send the signal that you stand – helps you stand out that helps you get your message across Next up, we’ve got the green gem, the time stone, one of my favorites What I love about this one is you can go backward in time, you can go forward in time, you can stop time Now, how does this apply to men’s style? Because I want you to know you only have so much time left on this planet to live this one life that you have

Do not let other people’s opinions and the fact that you’re scared sometimes of what people are going to think what they’re going to say hold you back from becoming great from doing what you want Do not let fear of what other people think stop you from doing what you want to do with this limited amount of time that you’ve got here on this planet So, go out there and fail hard, start that business Go off and ask the woman ask that beautiful girl that you’ve been wanting to talk to Just simply talk to her, get started because the things I regret in my life are the things I did not do

Do not live with regret Now, we’ve got the yellow gem, the mind stone So, the mind stone taps the user into the universal consciousness Now, how does this apply to men’s style? Because, guys, be careful of the voices in your own head Yes, we all have them

That is the self-doubt You’re going to have a lot of times you’re going to be wanting to take actions to actually go out there and do it and what are you going to say? Put it off until tomorrow, I’ll do it later, or I’m not good enough [0:05:02] These are voices that are coming out of your head and understand that, yeah, for generations some of that self-doubt some of that fear has saved us has actually protected us, but that can also work very much against us in this modern world when you need to go out there and actually do things that you’re not used to When it comes to dressing sharp to improving your style, initially it feels kind of odd putting on a sports jacket, maybe wearing those nicer dress shoes, but all of a sudden you start getting the compliments you start to appease and get, you know, get that voice out of your head out of there But, that voice is always going to come back, it’s always going to come in and give you a little bit of self-doubt

Gentlemen, have the courage to ignore the self-doubt All right, gentlemen, now it’s your turn I want to hear from you down in the comments Let me know what you thought of this video And, yeah, what do you think? Are you guys going to go watch Infinity War? I’m really excited

So, my brother just reminded me how much I love comics and how much I love, you know, both DC and, yes Marvel I love them both together I just wanted to create a video that’s fun Hopefully that actually you kind of saw some of how powerful these points are Again, if you know a huge Marvel comic book fan or someone is going to go see the movie, maybe share this video with them, I would appreciate that as we try to grow get better here at Real Men Real Style

And, guys, that’s it Take care I’ll see you in the next video No, no, wait, that wasn’t powerful enough Gentlemen, I command you to watch my next video next hundred videos

Yeah, right there, do it So, I’m thinking what probably would have been more useful is actually just to use a leather glove, one that, you know, you have a little bit more control over You can actually pick things up with Yes, see this one, it’s functioning And, just put the Infinity stones right in here because I mean they could shrink and get a little bit smaller you would think, right? Overall, it’s pretty cool

Don’t you think? I love this part right here Oops, sorry, I didn’t mean to do that or did I? [Laughs] Bringing in a little bit of Star-Lord over there, right? He would probably do something like that [0:07:02] End of Audio