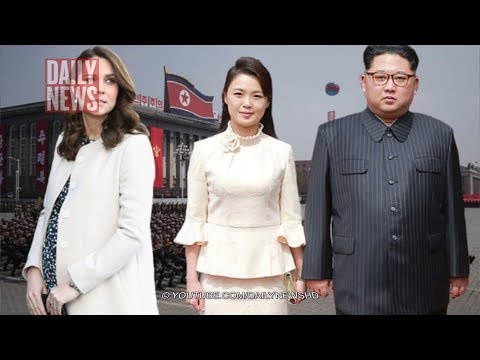 Kim Jong-un’s wife is taking SECRET fashion tips from Kate Middleton NORTH Korea’s first lady, Ri Sol-ju adopted "a Kate Middleton-like style" on her ‘unofficial visit’ to China with dictator Kim Jong-un by emulating her "presence and status through fashion", it has been revealed Ri Sol-ju, the rarely-glimpsed spouse of the world’s most elusive tyrant, sported pieces similar to Kate Middleton’s elegant and classic style on her trip to China

Seoul-based stylist Kim Myonghee said: “Ri seems to assure her presence and status through fashion, which is comparable with first ladies and royals across the globe "It appears that she wants to send the message to the outside world of a Kate Middleton-like style, showing only a moderate interest in prestige high-end brands” The former singer is believed to have a wardrobe full of high-end designers including Dior, Chanel and Valentino During the welcoming ceremony, North Korea’s first lady styled a camel cropped jacket with a matching midi skirt and court shoes She paired that with a necklace, ear studs, and a shiny pink and gold butterfly-shaped brooch

During a visit to the Chinese Academy of Sciences, Ri wore a white jacket and an apple green dress with a brown flower-shaped ribbon brooch She paired this with a nude leather clutch In her final outfit, for a lunch with the Chinese leader, Ri wore a cream two-piece dress with floral decorations on the collar and three-quarter sleeves with frills and a high neckline The reserved but expensive look is very similar to a cream coat worn by Kate Middleton from 2014 Like her British counterpart, Ri likes to adopt a simple but stylish approach to compliment her slender figure

Despite often shying away from the limelight, Ri Sol-ju is thought to have started a fashion revolution in the hermit kingdom Ri wore a tasteful mint dress with a smart matching jacket at the opening of a new terminal at Pyongyang International Airport in 2015 This look could have even inspired the Duchess of Cambridge who looked flawless in a similar shade and style earlier this year William Tang Tat-chi, a Hong Kong fashion designer, told South China Morning Post her style was “subtle” but not conservative Mr Tang said although her looks were "outdated," they were nevertheless impressive considering she came from a totalitarian country

Fans took to Chinese social media to praise the Dictator’s wife One said on Weibo: “Ri Sol-ju is indeed beautiful and amiable I can tell she would be good at ‘first-lady diplomacy’, better than Kim’s sister” Another said that Ri had “a powerful presence” during the trip Some compared Ri’s look with that of South Korean celebrities, saying she was “as pretty as Song Hye-kuo”, a popular actress in China